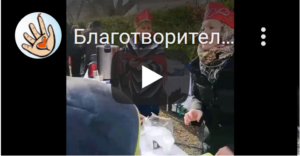 On November 24, in Baden-Baden, on the territory of the church of the Transfiguration of the Lord, a charity bazaar was held for the sake of the care-receivers of the Russian Orthodox Diaconia “Good Deed”. After the Sunday Divine Liturgy, fresh hot pastries, pumpkin soup, pancakes, pies, sweets and hot drinks had been served to everyone. And on the shelves, the handmade products were waiting for the visitors: knitted socks and hats, handmade soap, lavender sachets, Christmas gift boots, exclusive print bags, women’s jewellery, cookies, honey, jam, books, rag dolls, handmade angel figures made by our parish children at Sunday school.

After the welcome speech, the fair has burst: music and songs, smiles of our needlewoman sisters, guests and parishioners, children’s laughter and soap bubbles, goodies and bright colours of autumn have created an atmosphere of joy, warmth, friendliness and kindness! I especially liked the tour of the church with the visit to the crypt. That has been conducted in German for the residents and guests of Baden-Baden. During the tour, you could learn about the history of the foundation of the church built back in 1882, about Princess Maria Maksimilianovna of Baden and her contribution to the foundation of the church, about its fate during the 20th century, and ask interesting questions not only about the church, but also about whole Orthodoxy teaching.
There was a photo zone at the entrance, where everyone could try on the elements of Russian woman costume, put on a fake mustache, hat or glasses and take such funny photos for a good memory. Significant funds have been collected for the treatment of our care-receivers Vanya from Russia and Sergey from Ukraine.

For Sergei, 28 years old, the surgery in Germany is the last chance! The young man is been able to neither walk nor sit for 8 years. He is permanently tormented by severe pain in his legs. He has already had surgeries in Ukraine and Israel, but his health condition has worsened. Now, only a professor from Germany is taking on the operation. The operation will eliminate the pain in legs and recover the walking abilities.

Vanya, 4 years old, has survived a cerebral hemorrhage in the infancy. He underwent an emergency operation. After that, the right hemisphere of the brain was practically lost and a paralysis of the left side of the body developed. Later, the epilepsy appeared. Despite the dramatic diagnoses, Vanya develops well. He can walk, eat, and talk on his own. Vanechka attends a specialized kindergarten, hypotherapy and music classes, swims, is engaged in speech therapy. He requires an operation to separate the brain hemispheres.

We wish to thank all the craftswomen who made and donated so much of the stuff: all this was beautiful, practical, useful and warm! We sincerely thank all the visitors, and the parishioners, needlewomen and hostesses who have helped us with holding the bazaar! We thank the donators and those got involved with this good cause! God bless you!