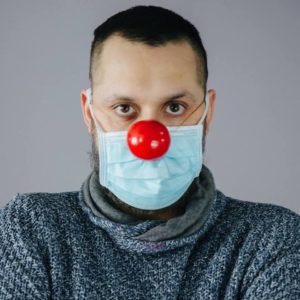 the leading professional hospital clown in Russia. He graduated from the Law Faculty of the Higher School of Economics, yet after a year of work, he has dramatically changed his life to became a clown volunteer at the Russian Children’s Clinical Hospital (RCCH). As a student, he has already attended an amateur theater studio at the institute, but best of all he was fascinated by clownery. At the RCCH, he has worked with children who survived the tragedy of Beslan, natural disasters, cancer and other severe illnesses.

He studied in Portugal, was trained in Paris, the Netherlands, Israel, Austria, Spain. In 2011 he has created the professional organization “Bolnichnye Klouny” – “Hospital Clowns” and became its art director, the main performer and the mastermind. Today, 60 clowns in various regions of Russia help children to fight the diseases with jokes and laughter. “Hospital clowns” makes 2400 visits to hospitals per year, 6000 meetings with children per month and 32 hours per week devoted to communication with children. The clowns work on regular basis in Rostov, Kazan, Orel, St. Petersburg, Ryazan. Now it is a charity program of persistent social and psychological assistance to children, undergoing long-term treatment in medical institutions or living in social institutions, by means of hospital clownery.

From Konstantin you can learn more about the activities of “Hospital Clowns”, about the tasks and projects, the “tricks” that help and the difficulties that arise, you can talk about creative “keys”, the perception of children’s grief and everything that is important when dealing with seriously ill children, as well as with their doctors and parents.