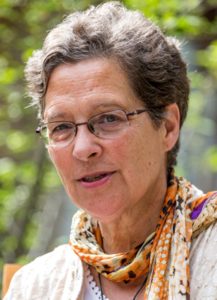 is a philologist-slavist, psychologist, reflexologist, volunteer of the First Moscow Hospice, the author of the book “There will be no separation.“
Frederica de Graaf was born in 1949 in Indonesia, where her father worked at that time. Six months later, the family returned to the Netherlands where Frederica lived for 25 years. In 1975, she met Metropolitan Anthony Surozhsky to change her life completely. In 1976, she came to Russia for the first time with a hospice mission. Because she was secretly baptised in Moscow, the Soviet authorithies have been denied her an enry visa for 15 years. She lived in England to be closer to her spiritual father Anthony Surozhsky. Later, she could go to Russia with the blessing of the Metropolitan. She has been living in Russia for over 17 years and has been helping the patients of the First Moscow Hospice. She knows how to listen and reveal pain, talk to the patients and be silently present with them. Frederica de Graaf participates in conferences, seminars, lectures on the specifics of handling seriously ill patients and their relatives. She teaches at the St. John the Divine Orthodox University in Moscow.